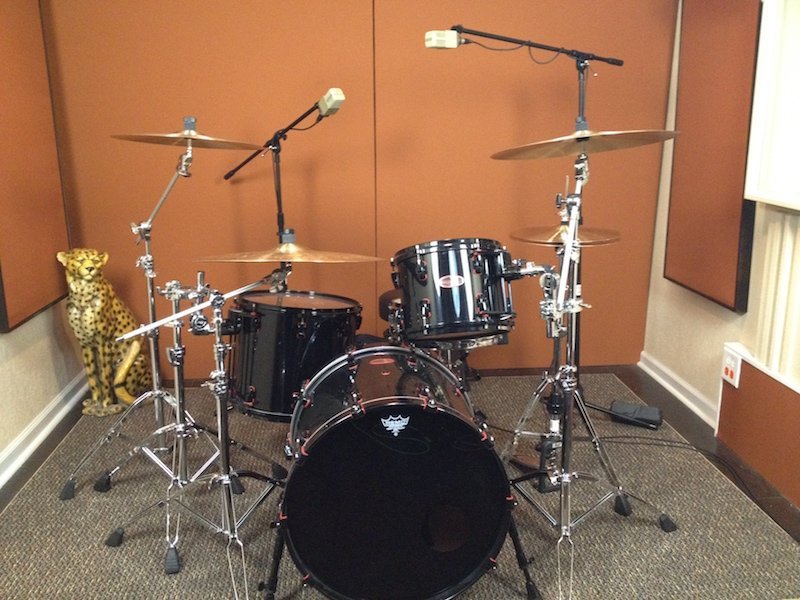 It’s often the case that mics are limited in number within a band’s available gear. So if you’re limited by the number of mics, your budget or just the amount of channels in your mixer, you might want to consider miking the kit with just a pair of overheads. Overheads capture the sound of the whole kit and aside from room mics, will give the best overall spread of the sound of the kit including the cymbals.

Overheads are usually condenser mics because these have an extended high end frequency response in comparison with most dynamic mics. They’re used in pairs because capturing the kit with a stereo image is usually preferable to mono. That’s not to say that you can’t just use one mic very effectively of course, but we’ll focus on stereo pair techniques here.

Well pretty much anything that can handle the sound pressure levels, but it’s best to go for a matched pair of cardioid condensers as these will give the best results when miking in stereo. Small diaphragm condensers tend to be good for this application as they’re a little more robust than large diaphragms, and they also happen to be slightly more directional which means they’ll eliminate more bleed and will provide for more tonal variation when adjusting their positions. A large diaphragm mic can be fine, though – particularly if it has a pad switch to attenuate the signal a bit.

You may not be familiar with stereo miking techniques, so I’ll cover a couple of the most common ways for miking a kit in stereo here.

XY is where a pair of mics are placed close together pointing at either site of the kit as in the image here. Their proximity to eachother means that you’ll avoid any phase problems as the sound wil reach each microphone at the same time. Each mic will pick up sound from either side of the kit to create a tight stereo image. By that I mean it will be stable, but also fairly narrow – it won’t sound that wide.

Don’t position the mics too high or they’ll be pointing either side of the drums rather than at the instrument which results in more room sound. Conversely, coming too low will pick up more direct sound – watch out for those cymbals! It’s a good idea to position the mics over the snare sothat it stays centre in the stereo image.

An ORTF spaced pair tries to emulate roughly the way our ears are arranged – the result is quite a natural stereo field with good mono compatibility and limited phasing problems. The image here shows pretty much all you need to know about setting this up. You’ll get a wider stereo image from this configuration. Again, be careful with positioning over the kit to make sure the sound isn’t too roomy. If you want to make either of the above methods easier for you, then I highly recommend a stereo miking bar such as this one from Rode which has the measurements and angles printed on for easy setup.

This is probably the method you’re most used to visualising when someone mentions drum overheads, but it’s also the most prone to difficulties. 2 mics are positioned a few feet apart pointing down and in towards the kit. Be careful with this one – the mics are much further apart which although gives a nice wide stereo image, can result in some fairly serious phasing issues. You can mitigate the phasing to a degree by keeping the distance from each mic to the centre of the snare drum the same. You can then check if there are still any phase issues with the rest of the kit by collapsing the signal to mono and listening for any phaseyness or hollowness. This technique does offer a wide choice of tonal possibilities as the positioning of the mics can vary the amount of room sound to kit sound quite a lot.

A slightly more unusual technique is the Recorderman technique which gets it’s name from a Recording.org forum user who popularised it’s use.

With this technique, two cardioid mics are positioned equidistant from the snare – in fact, both of them 32″ away (tip: you can use two drumsticks held end-to-end to measure this). One is positioned above the kit pointing directly downward toward the snare. The other is positioned over the drummer’s right shoulder pointing directly at the snare as well.  It is also commonly practiced with this technique to ensure that the kick is centred in the stereo image by also measuring the same distance from the kick to the mics as well. You can use 2 pieces of string to do this attached from the centre of the top of the kick drum and the centre of the snare drum head. Hold the ends of the 2 pieces together and find a position above the kit for each mic where both pieces of string are taut. Alternatively, if you can’t be bothered with all that bollocks, just pan each mic until your kick is central. Recorderman can tend to leave a hole in the stereo field when the mics are hard panned left and right, so it’s usually a good idea to experiment with the panning.

The advantage of this technique is that because the mics are comparatively lower than other techniques, they pick up more of the drums themselves, and perhaps less cymbals and room sound.

Some things to remember, then…

I could also talk about the Mid-Side recording technique but most people probably aren’t sporting the figure-8 polar pattern to acheive that, so I’ll save that for another post.