How to Tweak your POD Guitar Tones for Live Use 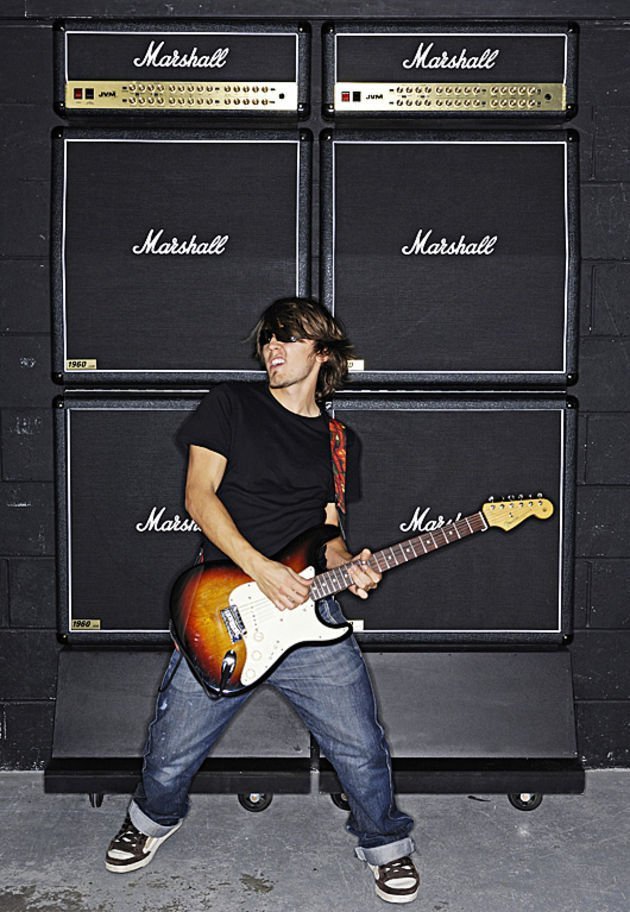 Have you ever spent hours dialling in your own awesome guitar tones only to find that when you get into a band rehearsal, or worse, a live gig situation, they sound really boomy or harsh?

Or maybe you’re trying to mix a song you’ve recorded and you’ve been mixing at low volumes like so many people recommend, only to find that it sounds like there’s way too much bass when you turn up your speakers loud.

Well in each case, you’ve just run headlong into a Fletcher-Munson curve, my friend!

The graph below shows something called Equal Loudness Contours. Because our ears are most sensitive to frequencies between 1 and 6 KHz (which might be called ‘mid’ frequencies) we tend not to hear bass and treble frequencies at low levels at the same subjective loudness as middle frequencies. You’ll notice on the graph that when the lines are at higher sound pressure levels, the bass frequencies especially don’t need to be boosted anywhere near as much to achieve the same perceived loudness.

This graph shows the original Fletcher Munson curves created in the 30s. The red lines are a more recent set of curves computed from a much larger sample group and are now deemed as being more accurate – although both represent the same principles.

So how can you make sure your guitar tones are going to work at gig or rehearsal levels? Well I’m afraid it’s going to mean turning up your amp or pedal (or speakers) to least 85db (loud basically) to make sure everything sounds good at that volume (incidentally, 85db is the level studies have shown to be optimal for reference mixing). You don’t have to do this for long, but you will need to hear it at gig volumes to ensure you’ve got the right balance of bass and treble to mid.

Obviously you can guess at what gig volume might be, or maybe you know it’s number 9 on your amp’s volume dial. If you’re not sure, though, just download a free SPL meter (Sound Pressure Level) app for your smartphone, and you can find out exactly how loud your amp is at. (set it to ‘A weighting’ which is equivalent to human hearing sensitivities).

Another reason to get an SPL meter is to ensure that all your tones are the same volume. So when you’re flicking from patch to patch on stage, you’re not getting annoying differences in level from each of them.

These principles can also be applied to mixing. Make sure you mix at different volume levels so you can hear what your mix is going to sound like loud. You’re going to need to find a balance for your bass and treble between different volume levels. This is also a similar reason to why we use dedicated monitor speakers instead of hi-fi speakers to mix on – hifi speakers hype your sound so you have exaggerated bass and treble or mids, the upshot being how do you know that what you’re hearing is how it actually sounds? That’s why monitor speakers have as flat a frequency response as possible – so you can minimise the amount they lie to your ears!

There aren’t that many graphs I care to recall when it comes to sound engineering, but this is definitely one that you should bear in mind.