Getting a Good Vocal Sound in a Home Studio 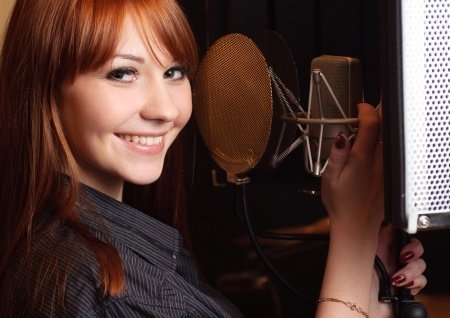 Getting a good vocal sound in a home studio doesn’t have to be difficult or expensive. Here are my tips to help you get better vocals on your recordings.

Don’t worry too much if your mic choices are limited. Use what you have available. If you have a selection of mics, go for a large diaphragm condenser if you have one as it will have better sensitivity to higher frequencies which is advantageous for recording vocals. There’s nothing wrong with recording your vocals through a dynamic mic if that’s all you have – plenty of famous singers have used a Shure SM58 in the studio: Brandon Flowers of The Killers and Bono of U2 are a couple of examples.

Any time you make a ‘p’, ‘t’, ‘b’ sound, without a pop filter, you’d get what’s called a ‘plosive’, where your mouth sends a little puff of air at the mic. Mics aren’t great at dealing with this and it will sound pretty bad on the recording if not dealt with. Using a pop filter about 4-6 inches from the mic will really help tame this. It’s also a good way to keep singers at a particular distance from the mic as it’s a physical barrier…

3. Distance from the Mic

Ideally, you want your singers about 8-10 inches from the mic as this will make less of a difference if they move around whilst singing than if they were right up close to the mic. This distance will also allow the voice more room to project to the mic – a singer’s voice is projected from the chest, throat, mouth and nose – if you were right up against the mic, it would capture sound from a much more focussed point of your face and therefore would not give you the most natural sound.

Also, let’s not forget the proximity effect. The closer you sing to most mics, the more the low frequencies are boosted. This is usually undesirable in the studio unless you’re going for a particular sound. You don’t want your voice having an unnatural degree of low-end as it could just end up fighting with the bass and drums for dominance.

Singers can be encouraged to work the mic when they’re singing. Working the mic means moving yourself further away when singing loud notes, or vowel sounds, and closer when you’re getting quieter. Don’t go too wild, since compressors can compensate for volume changes, but it definitely helps.

4. Get Your Gain Staging Right

This simply means the level that you capture your vocals at. In days gone by, in the analog world, we used to push the signal as hot as we could to compensate for any hiss that was generated by the gear. This was fine because if there was any clipping, it was quite a pleasant, warm kind of distortion. However, digital systems don’t have the noise floor of analog systems, so they don’t need to be pushed as hard, plus digital clipping is absolutely horrible – seriously, you don’t want that on your recording. So the bottom line is, you don’t need to push your signal hard with a digital recording system. Go for an average level of -16dBfs or around about half way up your meters. This will give your singer more headroom and you’ll have more flexibility when it comes to mixing.

Probably one of the biggest factors that will influence your vocal recording will be the sound of your room. Not everyone has the budget to create an acoustically treated recording space, but a bad room sound will quite possibly ruin your recording. So first off if you don’t have access to an acoustically treated space is, pick a room that sounds ok in the first place – not too much reflected sound. You can create your own acoustic treatment by hanging blankets or duvets around the singer – ideally behind and in front of the mic. A carpeted floor helps, and it you can get something soft over the singers head that’s a bonus too. Reflexion filters are becoming more popular and make a big difference to a recorded vocal by shielding the rear and sides of the mic. You still need to pay attention to the surfaces in front of the mic (behind the singer) and above and below the mic though.

If you’re recording live, consider recording your vocals after the band has played the song to remove the bleed that the instruments will cause. It’s pretty difficult to work with a vocal track that has drums all over it!

Likewise, even if you’re recording your vocals as an overdub, make sure your headphones aren’t so loud that they’re bleeding into the mic. Watch out particularly for the click track which can be quite piercing.

7. Finally, Get a Good Performance

It can be tough recording vocals. You end up singing the same part over and over again. Don’t knacker your voice out. Do warm it up before you start. If it’s not working, consider stopping and coming back another day if possible. Voices are finicky things sometimes.

So there you have it. Follow these 7 vocal tips and you’ll be amazed at the results you can get even at home.

Oh secret tip number 8: Don’t hold the mic like the girl in the image on this post. That would be silly. Very silly.