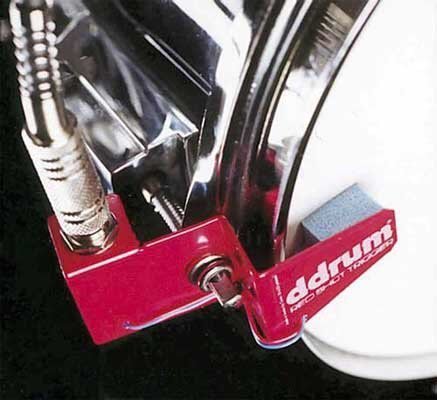 If you don’t know what drum triggers are, they’re a small sensor device that clips onto the side of a drum to sense the vibration of the drum head when it’s struck. They translate that sensory information into MIDI which can then be used to trigger samples, patterns, backing tracks, virtual instruments etc.

Many drummers might incorporate triggers with the kits to expand the range of musical opportunities available to them. Being able to trigger a selection of samples using an Octopad, for example, can introduce bass notes, effects or percussion sounds into the performance.

Another cool way I’ve discovered to use drum triggers is when playing an acoustic kit at a small venue. You might find that the kit is loud enough by itself and doesn’t warrant being miked up, but then you might find that there is a sonic disparity between the rest of the instruments coming throug the PA and the kit which has a different quality in the room.

Using triggers and a drum module such as the brain of a VDrums set, for example, you could simply map your drums to their digital counterparts within the drum brain and it’s kinda like you’re playing a VDrums kit through the PA. You might not want to mix this as loud as the kit itself, but just enough to reinforce the sound. The advantage of doing things this way is that you don’t need multiple mic stands and mics and their attendant XLR cables strewn everywhere; just a set of clip-on triggers and a single cable that connects them from the drum brain to the desk in stereo. The brain is outputting your kit sounds as perfectly EQ’d, panned and compressed which makes the job easier for your sound guy too.

Another way you can use this is in the studio as a means of capturing a MIDI version of the drummers track. Particularly if you’re recording a band on location where there’s a chance the room isn’t flattering to the final sound, or if the drums themselves sound crap and there’s no other alternatives. Using triggers allows you to get a backup of the performance as MIDI that you can then apply different virtual kits to, or simply augment the recording of the drums with the odd sample.

Of course you can always use a sample triggering tool in software, but these aren’t usually as accurate as drum triggers. Plus, a MIDI version of the recording can be quantised and edited as you see fit. The only problem with this approach is that you can’t trigger cymbals which means you either need to record the cymbals separately or be content to use samples of cymabls. Recording cymbals on their own can be tricky if the drummer has nothing else to hit in terms of drum pads, and the room sound from overheads might mis-match with the room sound from the virtual drums, so close miking seems to be the best way to capture them if you’re going to do this. Whereas digital offerings can sound fine when played once, but tend to sound a bit fake when multiple hits are played on the same cymbal. However, mixing and matching these technologies can sometimes really help to enhance a performance where things aren’t quite right and it’s worth having drum triggers in your toolbox whether you’re a drummer looking to incorporate exciting new sounds into a performace, or a sound engineer looking for ways to simplify recording or live drums.